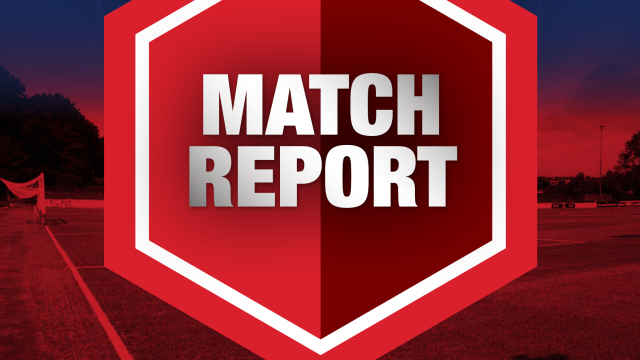 Determined Becks Back To Winning Ways

A determined Becks side earned the three points with a penalty from Luke Rooney and a goal from Ryan Hall in the second half to overturn an undeserved one goal deficit.

It was a gloomy Autumnal Eden Park Avenue that welcomed a well-organised and well-supported Hollands & Blair. With Stefan Cox suspended, Shameek Farrell took over the right-sided attacking position in an otherwise unchanged Becks line-up that were unlucky to lose to Corinthian last time out.

Skipper Ashley Carew almost opened the scoring with a fifth minute snapshot from outside the area that unluckily cannoned back of the inside of the post across the face of goal and out for a goal-kick. From a similar position, Steve Townsend then shot narrowly wide. On the half-hour mark disaster struck when Kiki Oshilaja was harshly judged to have fouled the attacker that came in from his blind spot after already clearing the ball out the box. He earned himself a ten minute sin bin for his attempts to change the referees mind on top of conceding the penalty.

Ben Brown duly put the visitors ahead from the spot sending Michael McEntegart the wrong way. Despite having a man less Becks responded well and were awarded a penalty of their own for handball minutes later. The normally dependable Carew’s effort pinged back off the post and into play to the disappointment of the home support. The well drilled, organised, hard-working visitors were fortunate to head into half time with a slender 1-0 lead intact having sat back for most of the game and picked their moments to counter attack.

Becks showed their renewed intent from the second-half kickoff and just four minutes had elapsed when central midfielder Luke Rooney converted a 49th minute penalty awarded for a foul on Farrell whose break down the right had seen him first outpace one defender and then skilfully cut inside another before being brought down.

Becks were now well and truly in the ascendancy. With Oshilaja and Wanogho defending supremely, ably supported by holding midfielder Junior Kaffo and link-man Luke Rooney they provided the platform for Harvey Brand to start maurauding down the right. Carew, Farrell and Hall provided some neat interchanges through the middle and LB Archie Johnson and left-sided attacker Steve Townsend posed a constant threat down that flank.

Becks missed a great chance to go ahead when Carew was played in clean through on goal, sitting the keeper down and only needing to take the ball round to finish into an empty net. Instead he audaciously scooped the ball over the keeper but unfortunately over the bar as well.

Carew immediately made amends though, turning provider by slipping Ryan Hall through just before the hour mark to finish neatly for what proved to be a deserved match winner. Having visibly wilted in the face of the Becks second half onslaught the visitors dug deep and battled hard, maintaining a threat on the counter-attack but McEntegart was rarely troubled in the Becks goal and it was the home side who enjoyed the better of the chances with Townsend, Hall, Carew and impressive substitute Damian Ramsamy all guilty of failing to kill the game off when creating good opportunities.

Hollands & Blair will be sure to take points away from our title rivals this campaign and Becks get a dress rehearsal for the return league fixture when they meet them again next weekend away from home in the Kent Senior Trophy. But for now, after the disappointment of the loss at Corinthian, this was the gritty, hard fought response that boss Jason Huntley would have surely wanted to see from his players who remain eight points clear at the top of the table with two games in hand. 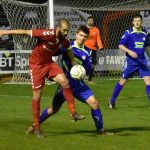 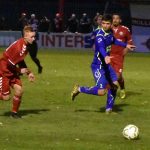 Sheppey earned another big victory to continue a very high scoring season reaching 50 goals in just 14 games. That’s an average of just over 3.5 goals per game. Chatham and Corinthian both won to keep our lead at the top from extending for now knowing they have both played two more games than us. Punjab’s win at Croydon lifted them off the foot of the table. Tunbridge had another postponement and now means they’ve played the least amount of games in the league, six less than the teams with the most. Despite sitting in eighth, 17 points behind the pace Becks have set. Tunbridge are on track to finish the season in second by the end of the season and should not be dismissed just yet by the top teams vying for promotion.