Beckenham Town Football Club is one of the older non-league clubs still in existence, being first affiliated to The Kent Football Association in 1887. Records show the club played in the London League from 1923 to 1933 and 1951 to 1961 and the Aetolian League from 1961 to 1964 before moving to the Greater London League from 1964 to 1969. In addition to its present day participation in the FA Cup and FA Vase, it also competed in the FA Amateur Cup from 1926 to 1967.

Amongst the club’s past Presidents is ex-Prime Minister the Rt. Hon Harold Macmillan MP and amongst the club’s Vice Presidents is Sydney Wooderson one of Britain’s greatest middle-distance runners. Amongst Becks ex-players are goalkeeper Ray Potter who played over 220 games for West Bromwich Albion, Frank “Dot” Morris who played over 70 games for Crystal Palace and Pat Saward who played for Aston Villa in the 50’s and captained The Republic of Ireland. More recently ex-Charlton Athletic star Jason Euell wore Beckenham’s colours.

Honours include the London League Championship in 1927-28 and runners-up in 1930-31. Unfortunately, the club folded in 1969 merging with Bromley FC. The club was subsequently re-formed and joined London Spartan League in 1975 and enjoyed some early success being Runners-up to Fisher Athletic in the Spartan League Senior Division in 1977-78. Town also reached two Spartan League Cup Finals, losing to Welling United and Farnham Town. More recent successes have been two previous appearances in the Kent League Cup Final in 1984-85 and 1992-93 and Runners-Up to Maidstone Utd in the Kent League Premier Division in 2005-06.  After three previous unsuccessful attempts in 1981/82, 2004/05 and 2007/08, finally secured a victory in the Kent Senior Trophy after a 4-0 win over Ashford Utd.

In July 1980 Beckenham moved from Stanhope Grove to their present ground in Eden Park Avenue joining the Kent League in 1982-83. In 2003, Beckenham FC was awarded £100,000 by the Football Foundation for ground improvements which enabled the ground to become enclosed and their award-winning pitch along with a drainage system to be laid. 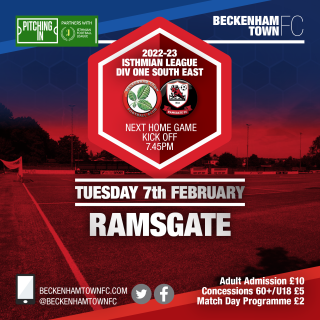 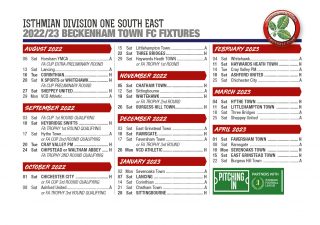